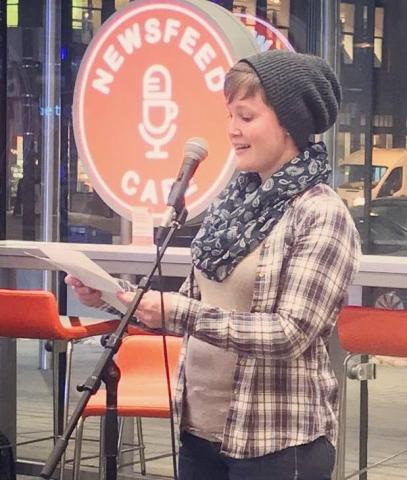 EDITOR’S NOTE:  A great Slam Archive needs a great Slam Directory!  Today’s blog entry is by Erica Charis-Molling, P4 volunteer EXTRAORDINAIRE.  For most of the past year Erica has been working on updating our listing of both active and defunct slams, so that all of our content can be properly linked to the venues with which they are associated.  It is a huge task, and we are immensely grateful for the hundreds of hours that Erica put into this effort.  I asked her to update everyone on the process.

It was hard to know where to start when Mongo first presented me with this task. I'd been asked to add and update venue information for each of the existing slams in the P4 database. The hope was that, with the right information, past and present slam locations could be searchable (perhaps even on an interactive map!), and all of the archive's content could be properly linked to its associated the slam. While that seemed straightforward enough, there were a lot of slams in the directory and I quickly discovered my job wouldn't be as easy as Googling.

I decided to start with DC and Maryland, mostly because I was headed to both for AWP and ACRL. (Association of Writers & Writing Programs and Association of College & Research Libraries, for those not in the acronym loop!)

A quick-and-dirty search for Busboys and Poets in D.C. revealed a confusing website (to a non-local, anyway) that seemed to indicate not one, but four venues. Did all four of them have slams? I sifted through the website for contact info and emailed the person I thought most likely to help me. Moving on to Maryland, I searched the state in the P4 database and came up with—wait what?—no results. Now I'd admit, I was a bit out of touch with the slam scene, but I knew for a fact that Slammageddon had won Nationals in 2016! How was there nothing in the database for Maryland?

More Googling and Facebook crawling produced few answers and more dead ends. And still, I had no email response from D.C.

A month later in D.C., I made my way to the flagship Busboys and Poets location to enjoy dinner and hopefully shake down some information. I was given two contacts, scrawled on a napkin. I flew home with that and a business card snagged at the University of Maryland's AWP book fair table. (I'd nearly pounced on the poor woman in my excitement.)

Another pattern emerged too: the fewer resources a place had, the more likely they weren't in the database and/or had a spotty information trail to follow online. Theoretically, the fewer the resources, the less "extra" the slam would have to expend on things like an active and current Facebook presence or a well-designed and up-to-date website. Put more bluntly: the poorest states and cities were often the hardest to research.

Some states simply had no slams I could easily track down and it was impossible for me to tell if that was an information problem, a searching problem or if there were literally entire states with no active or legacy slams. Alaska, Delaware, Montana, North & South Dakota, Vermont (?!), and Wyoming remained empty, despite public pleas from my Facebook page for information to help me fill the gaps.

Were there really just no poets in these places? Perhaps. And maybe it wasn't even entirely a matter of resources. Even in states with few slams instead of none at all, the venues were often squarely in a dot of political "blue" surrounded by a sea of "red" with not a slam in sight.

But for all the empty information pockets I encountered, I also encountered a number of generous people who were more than willing to help me fill them. The woman from the University of Maryland table at AWP put me in touch (indirectly) with Slangston Hughes, who was the first in a long line of openhanded individuals who worked alongside me. A board member, who in the course of his own project created an overlapping database, willing shared what he had. Numerous poet-friends responded to my "who do I know in Arkansas" type queries on Facebook. I even had a lovely conservation with the poet laureate of Las Vegas!

As I went the task list grew. Could you add hosts for each slam too? Could you add logo images where you can? I gamely added the content I found as I went. Yet even with all the help I was getting, it was always a bit of a guessing game—did the slam shut down or did they just stop updating their Facebook page? did two slams merge or part ways—or was there just a name change? I did what I could from my desk in Boston, but I simply couldn't travel everywhere.

When I (finally!!) reached the bottom of my seemingly endless list of states and provinces, I knew I'd done what I could do. After a full year of multiple hours a week, the database is now as complete as one girl with a laptop can make it.

This is where you come in.

You, who live and spit poems where I don't. You, who who've been in the scene for years and know what's what and who's who. You, who maybe don't know much about Montana, but you know folks who know folks who call total bull on there being no slam in the state. You can make this an incredibly rich tool for documenting slam's contributions, present and past. You can make it a truly grassroots project that doesn't let anyone's voice slip through the cracks. A history of and by the poets of this movement and art form. I invite you to log in to the P4 Slam Database, and let them know if you see errors or omissions. Nobody knows the local slam scene better than those who live and work in it!

I've given you the best starting point this librarian-poet is able to give. I leave it in your incredibly capable and generous hands.

POSTSCRIPT:  P4’s next step is to open up the editing of individual slam listings to the slammasters (or other designated contacts).  If this is you, you can expect to hear from P4 in the near future, inviting you to check your slam’s listing on line, and ensure that our information is correct.  Thank you again to Erica for the amazing work!  —Mongo

While digging into the possibilities of Nickel City Slam (Buffalo, NY), which my daughter, Gabrielle, founded and hosted from around 2005 thry 2008, I came upon this webpage: http://www.justbuffalo.org/event/8th-annual-qew-poetry-slam-01-14-2017/. It lists not only the Nickel City (in 2017!), but also Nitty Gritty Slam (Albany, NY) and Pulse Poetry Slam (Jamestown, NY). A  woman's work is really  never done, is it?

Dang. Too late, I just checked your fine compilation -- you've already got Nitty Gritty and Pulse. My bad. But if you need anything more on early Nickel City, I have some of Gabrielle's notes.

Ha! Thanks Tom. I did try to be as thorough as I could without getting too far into the weeds. But there are bound to be some I missed—and I hope as you or others notice the gaps, you'll jump in and fill them. A comprehensive cataloging of all performance poetry venues, past and present, goes far beyond one woman's work, I'm afraid—even if I spent the rest of my life doing nothing else. The only hope of such a task to be truly representative is for the community itself to contribute what they know. (And again, thanks for setting the exmaple in that regard! :) )