Be a Slam Poet 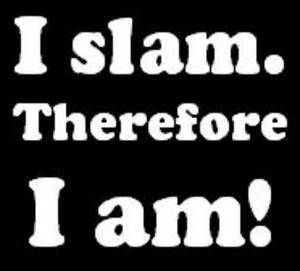 At their most basic level, the credentials required to become a slam poet are: None. That is not to say that there are no prerequisites, tools or skills required to succeed, but merely that no one will prevent you from stepping onto a stage and presenting yourself to an audience. What happens then is up to you.

One would be wise to understand something of the slam environment before attempting to win over an audience. Here are some remarks on the subject from a scholar of the scene:

“The sheer variety of work performed in competitions signals that slam poetry--if we can think about it as a body of work--is not defined by tone, form, or subject matter, but by what it wishes to achieve: a more intimate and authentic connection with its audience through performance. … This sense of authentic connection reveals a truth: that the poetry performed at slams courts its audience, and diligently so. Whether for scores, applause, or mere power of persuasion, slam poets actively attempt to engage and elicit a reaction from their audiences. … In this respect, slam poetry resembles not a form of poetry, but a rhetorical mode of address, one that woos its audience by making an argument, softly or loudly.
A slam, much to the chagrin of some literary critics, puts its audience in the seat of critical power--and an audience who has come to see poetry performed at 8 pm on a Friday night is not one whose intelligence we should insult. … [T]he most significant aspect of slam poetry is its performativity--its emphasis on presence and the body, its enactment of the authentic, and its performance of the self, identity, and authorship. It's not the sounding of words that a slam audience craves, but rather a personal experience that affirms to them what poetry is and does, regardless of the poet's (or their own) pedigree.”
―Susan B. A. Somers-Willett, “Can Slam Poetry Matter?,” Rattle, 19 March 2009

Most new slammers would also benefit from a hint or two on how to create their first poem for performance. So here’s a link to a short video by Gayle Danley to help you find your way.