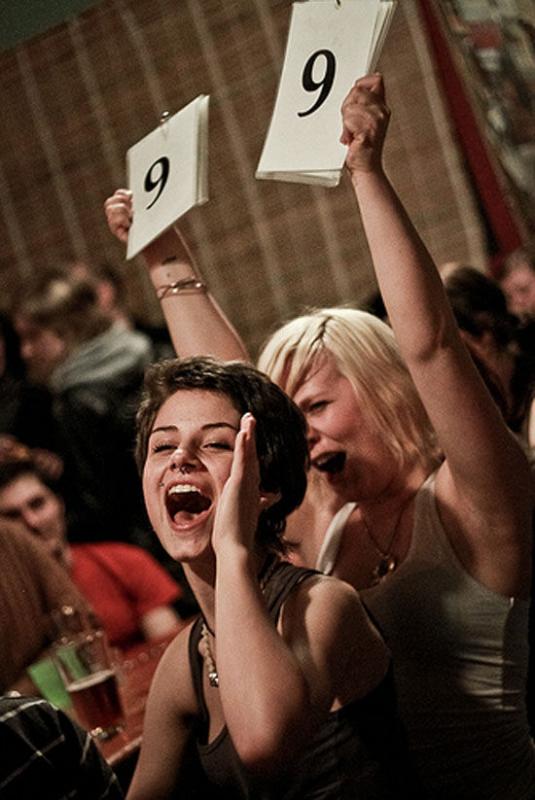 Local slams may organize their events in a variety of ways.  In some cases the evening begins with an open mic, where both visiting and local poets can showcase their work.  In many slams each evening will also include a featured poet, often from out of town, who performs a collection of their work.  But always, the main event is the slam competition itself, which is almost always the last, and largest, part of the evening.

Most slams open with an introduction to their rules, which can vary from slam to slam.  Here’s an example of a typical set of rules, as descibed by the founder of the poetry slam himself:

The Slam is a performed poetry competition judged by five members of the audience. Poets have three minutes to present their original work and they may choose to do so accompanied by members of their team. The judges will then score the piece anywhere from 0 to 10, evaluating both the poet’s performance and the contents of the poem. Points will be deducted for violating the time limit. The highest combined team score wins the bout. We encourage the audience to let the judges know how you feel about the job they are doing. We exhort the judges to remain unswayed by crowd pressure. We are sure that the poetry will be worth your attention.
— Marc Kelly Smith, Stage a Poetry Slam

These rules, and a more general introduction to the evening are ofter proclaimed in something called "The Slammaster's Spiel"  A very famous example is Bob Holman's poem "Disclaimer", which begins like this:

As Dr. Willie used to say,
We are gathered here today
because we are not gathered
somewhere else today, and
we don’t know what we’re doing
so you do - the Purpose of SLAM!
being to fill your hungry ears
with Nutritious Sound/Meaning Constructs,
Space Shots into Consciousness
known hereafter as Poems...

You may read Disclaimer on Bob's blog here, or listen to it here (where it was featured as the first episode of the IndieFeed Performance Poetry Channel).

National slam competitions are organized by Poetry Slam, Inc. and necessarily conform to more formal procedures. Here’s a link to PSI’s rules for those curious enough to dive into the details.

In short, an evening at a poetry slam has its own specific structure, suspense, conflict, and characters, a classic drama, as described by Marc Kely Smith:

Find your local slam and get involved, by searching our master database of all slams, worldwide!  Join us!!!